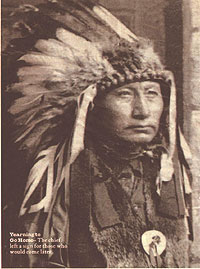 IN A RED-BRICK HOSPITAL in the heart of Victorian London, the Sioux Indian woman sat anxiously by her husband’s bed. The man’s breath came in labored gasps. There was nothing doctors could do for his pneumonia.

Long Wolf had faced death many times in battle, and his body was covered with scars. But to be left for all eternity in a strange city half a world horn home was unthinkable.

As a thunderstorm raged outside, Long Wolf told his wife, Chimpila, how he yearned to join his ancestors. To signal his presence to any Sioux who came to look for him, he would need a sign upon his grave. He sketched an image to be engraved upon his tomb.

So it was, in London’s fashionable Brompton Cemetery, that a Sioux warrior from America’s Great Plains was laid to rest at the end of a stone colonnade. The tombstone was carved with his name and the date of his passing: June 11, 1892. Above that was the image of his namesake, the wolf.

Chimpila and her daughter Lizzie, said their sad farewells and began the long voyage home. On a reservation in South Dakota, Lizzie would listen wistfully as Chimpila told her the stories of her father’s life, and of his last wish. Later Lizzie passed these stories on to her daughter, Jessie. Still later, Jessie would watch her children snuggle into bed. Settling into a chair, with the oil lamps down low, she would tell them again of the brave warrior, lost forever in a city beyond the sea. 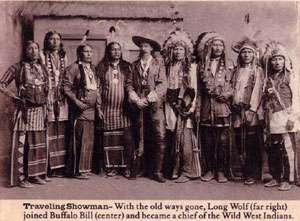