(Interviewed in her last year before succumbing to colon cancer, the fabled screen star reveals secrets of upper-crust dressing, her waif-look, and more.) 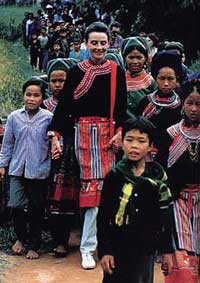 Audrey Hepburn on a Role

Audrey Hepburn agrees to switch roles and play the reporter for a moment. She is on the phone from California, recuperating from jet lag and fundraising jaw after one of her many benefits for UNICEF. Next she will fly to Chicago to attend another sold-out gala for the world humanitarian agency.

In her light British accent, she sounds as refined as she looks in publicity photographs, but we can't see all that elegance through the optic fibers. Would Ms. Hepburn please describe the scene on her end of the line?

Her mellifulous voice floating over the phone, she reports that she's sitting in the bedroom of a long-time friend's Beverly Hills home. It's 10 a.m. West Coast time.And what is she wearing for this mid-morning interview? "I'm still in my dressing gown," she offers.

We imagine a flowing silk peignoir, something she might have worn years ago as the gamine princess in "Roman Holiday" or the transformed Eliza Doolittle in "My Fair Lady." Or perhaps it's the famed dressing gown she is said to wear at home in Switzerland during early morning jaunts with her four Jack Russell terriers.

Imagine the sight: swan-necked Audrey in her peignoir. Hounds. Orchards. Rays of the rising sun.

But then we realize, we can't imagine it at all. What, exactly, is a dressing gown? "It's a bathrobe," she says. "I'm wearing a terry-cloth bathrobe."

"Baaathrobe," she says, imitating the twanging of the natives (that's us). Then she laughs.

This lady is genuinely unpretentious. That's the Hepburn mystique.

"What you see in Audrey Hepburn is exactly what you get," says Lawrence E. Bruce Jr., who is president of the U.S. Committee for UNICEF and has traveled with her to Ethiopia. "There is no public and private persona. She is what she seems to be. It may sound boring, but Audrey is one of the most special human beings I've ever met in my entire life."

Chicago is ready for that kind of boredom. The gala "An Evening With Audrey Hepburn" Saturday night at the Stouffer Riviere Hotel is sold out, with 1,200 guests expected. The event should raise more than $100,000.Hepburn will not appear in terry cloth, but plans to wear a short black silk organza dress by her signature designer, Givenchy.

The Hepburn presence at such fundraisers always inspires off-the-scale effusion, according to Bruce. "I've seen it happen at parties in Beverly Hills and with the leaders of society in city after city. People gush whenever they meet her."But Hepburn retains her modest demeanor, ever motivated by the serious purpose of her work as goodwill ambassador for UNICEF. She stepped back from filmmaking more than 25 years ago to raise a family and now devotes herself tirelessly to her humanitarian work.

Talking with Hepburn for just a few moments, one quickly sees she is no mere figurehead for the agency. With no prompting, statistics about poverty in the developing world roll from her tongue. Did you know that annual expenditures for health care are $3.50 per person in Africa? Did you know that the infant mortality rate in Afghanistan is 300 deaths per 1,000, compared to 8 per 1,000 in Sweden? And on and on.

She is insistent with her information. One wonders why she seems to worry so much about the impression she makes. After all, what spoil-sport would have the nerve to grill this grande dame about her humanitarian work, for which she receives just $1 a year?

"It's very odd, but I am basically reserved by nature. This is even more difficult than acting," she says. "I can't hide behind a character and learn my lines."

So she learns her stuff. Her skill as an advocate was crucial when officials asked her to travel to Ethiopia in 1988. Organization officials hoped Hepburn's involvement would help jump-start journalistic interest, already stretched to the limit by earlier famines in that troubled country.

In press interviews and conferences after her Ethiopian trip, reporters no longer asked her the same questions as in the old days, such as, "What did you eat for breakfast," Hepburn says. "I'd get questions like, 'Why are we sending money to Ethiopia? It's a Marxist government run by that terrible man.' The answer is easy. We're not sending money to him. A child is a child is a child in any country, whatever its politics."

Her convincing efforts helped the agency raise $1 million for relief in Ethiopia, according to Bruce.

Though she has learned her facts through extensive reading at home, Hepburn still quakes before public talks, such as her address last week at the Commonwealth Club in San Francisco. "There were 1,200 people sitting there," she says. "I can't tell you. My stomach turns over and I get a headache and my knees shake. There's nothing you can do about it."

So she goes back for more. Since accepting the honorary position with UNICEF in 1988, she has traveled to such developing countries as Sudan, El Salvador, Guatemala, Honduras, Mexico, Venezuela, Bangladesh and Vietnam. Usually, people in these poverty-stricken nations don't ask her the old cliche question - "What was your favorite movie?" - because they don't know who she is.

"They do know I'm with UNICEF, and that thrills them infinitely more than if I did 'Breakfast at Tiffany's,' " she says.

That kind of reaction thrills her too. Her commitment to the organization, which distributed $765 million in aid last year, grows from her own experience. She was born in Brussels in 1929, the daughter of a British banker and Dutch noblewoman. After her parents divorced in 1935, she left her British private school and returned to live with her mother in Arnhem, Holland.

Five years of Nazi occupation caused food shortages that left many children, including Hepburn, badly malnourished. "Our past has made us what we are today," she says. "Your soul is nourished by all your experiences. It gives you baggage for the future and ammunition if you like. I never stop to specifically think about what I went through and what these children (in the developing world) go through. They are going through something far worse than I ever did. These children are starving. But I recognize the symptoms."

The malnourishment she suffered during the war was in part responsible for the waiflike appearance that first endeared her to 1950s moviegoers. The story of how her family survived on tulip bulbs and turnips has become legendary. But the truth was not quite so dramatic.

"Tulip bulbs. It sounds terrible," she says. "You don't just eat the bulb. Tulip bulbs actually make a fine flour that is rather luxurious and can be used for making cakes and cookies."

Visiting suffering children around the world has reminded her of the resilience of her own early years. "As long as he has the minimum, a child is perfectly cheerful. I remember also having lots of fun. We didn't just sit on the floor for five years and cry. Of course, there was always a cloud of fear and repression, and terrible things were going on."

Her uncle and a cousin of her mother's were shot for their part in the Resistance. Her brother spent time in a labor camp in Germany. In those years, Hepburn and her young friends imagined the food they would eat when the war was over. When the tanks rolled in to liberate Holland, relief-agency trucks were one step behind. Hepburn remembers she got sick from one of her first relief meals because she put so much sugar on her oatmeal.

Plucked from a crowd

After the war, she returned to London to pursue a career in dance, appearing in nightclub acts and revues. As an extra in a Monte Carlo film shoot in 1951, she was literally picked out of the crowd by the writer Colette to play Gigi in the Broadway play of the same name.

After making more than 20 movies in 13 years, she retired in 1966 to raise her son, Sean. She had always looked forward to having children, and wanted to be there when he came home from school, she said at the time.She and actor Mel Ferrer divorced in 1968, after eight years of marriage. Soon after, she married Andrea Dotti, an Italian psychiatrist. In 1970, their son, Luca, was born. The marriage ended in 1980. For the last 10 years, she has been living with Dutch actor Robert Wolders, the widower of Merle Oberon.When the children were older, she took on intermittent film roles, including the female lead in "Robin and Marian" in 1976. Smaller parts followed, including one in Steven Spielberg's "Always" in 1989.

Though she is not considering any film roles now, Hepburn doesn't rule them out. "Perhaps the time will come," she says. "But right now I'm looking to stay home a bit more."

Her life in a one-time farmhouse near Geneva is "casual," she says. The old house came complete with an orchard, flowers and vegetable patch, where Hepburn has developed her green thumb. She listens to music, enjoys going to movies and watches some TV.

She probably missed her favorite TV show, "L.A. Law," Thursday night, because she was scheduled to fly into Chicago for the Saturday gala. She first visited Chicago when "Gigi" came to town 40 years ago. "I love it," she says. "Chicago is an exciting town."

Bracing for the cold, she says she has packed extra socks and sweaters in her two suitcases and a vanity case - the self-imposed limit on her travels. But a fur coat won't be among her things. "I'm anti-fur. For many years I didn't think fur suited me, but years ago I gave in and had a mink coat made," she says. "Then I woke up to what it meant. Now it's hanging in the attic and there it shall stay."

Instead, she will be wearing her good cloth coat. "It's very cold in Chicago," she says, "but I don't care much about the weather as long as my plane arrives."