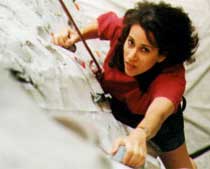 Get Solid as a Rock

IF YOU'RE AFRAID, don't look down, the rock climbing instructor told us. So naturally, I did. I unglued my cheek from the granite face of Mt. Joe and peered over tree tops and mountain peaks stretching miles into the Adirondack wilds.

It felt like nothing separated me from eternity - even though I was tied to a rope that my buddy Mary Sampson was "belaying" on the ground anchored to a tree. Suddenly, I realized I had shimmied 60 feet up a sheer cliff wall my first time rock climbing. Just 15 feet from the top, I froze in panic. Why hadn't Mary and I just gone to see "The X-Files" instead?

But testing limits was part of the "Women's Challenge" weekend introducing women to wilderness adventure in a "supportive, less competitive" environment than with men along. The concept was rock climbing with an Adirondack Mountain Club instructor during the day, and luxury spa treatment by night at the Mirror Lake Inn in Lake Placid.

On Friday night as we discussed our fears - for example, falling - the weekend's massage therapist/climber, Christina Haberek, told us to think positive: "Fear is an incredibly powerful place if you give into it and go forward." It sounded dubious. To city gals, fear spells R-U-N, but after traveling seven hours from New York City to the Adirondacks on a repeatedly-delayed Amtrak train, we weren't budging.

The next morning, while hiking to the climbing rock, Mary and I female-bonded with the four other women in our group when a posse of hunky guys trudged past at top speed: one guy stopped to rest, but his friends kept going, shouting back at him from way up the steep trail: "Slow down, but don't ever stop. Don't ever stop."

We gals clucked over the "Lord of the Flies" scene for the rest of the hike. Men are so competitive, we yammered. Women are so supportive. It was our mantra, until we saw the sheer climbing wall towering like Godzilla in stone. That's when we shut up.

Before we arrived, our climbing instructor, Connie Schaffe, had secured the top ropes to a large tree above the rock face. In "top rope" climbing, you wear a waist harness tied to a special nylon rope slung through a metal loop at the cliff's peak called a carabiner. The rope's other end runs through a friction device clipped to a person on the ground, who belays hand over hand, taking up slack as the climber moves higher. In case of a fall, the belayer grips the rope and hangs on. Since we were beginners, a second person also held the rope as back-up.

"This is completely safe," Connie assured us, explaining that nylon climbing ropes are strong enough to haul a dairy cow.

First we practiced climbing a 30-foot rock face covered with numerous ledges for easy balance. All six of us made it, including one out-of-shape city slicker type. "I didn't believe I was going to do it," she said later. "I thought I would just be a New Yorker and refuse once we got there."

Her personal challenge achieved, she watched happily from under her mosquito net hat while the rest of us slapped on more "bug dope" and mentally prepared to scale the sheer 70-foot cliff. Up went the petite kindergarten teacher who runs marathons. Up went the twenty-something snowboarder, graceful as a dancer. Up went another runner, a health editor at a major women's magazine.

At my turn, I embarked without thinking, amazed that the rubber-bottomed climbing shoes that look like rugged ballet slippers grip rock so firmly. Pushing mostly from my legs, I balanced on crags too small to see from the ground.

My voice floated out over the wilds: "I don't think I want to go any further."

From below, instructor Connie told me to just relax. Then I remembered the magazine editor. She made it. So would I. I headed straight to the top.

Back on the ground, I felt pure elation: now I would never, ever have to climb a rock again.Or would I?

Back in Manhattan a few days later, Mary and I pondered the real challenge we faced in the wilds: accepting our competitive feelings about reaching the top. "When men around, women always compete with eachother to see who can seem the be the most nurturing. I felt relieved not to have to be fake nice around each other," Mary summed it up. "This was honest, authentic competition."

So we've decided. On our next all-girl outing, we're going climbing - even though we hate it.

(Writer's Note: The joke, of course, is that I soon had to climb a wall again--for the photo shoot. Never did again.-JS)