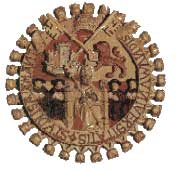 The medieval and modern mingle in happy harmony

In past centuries, the sons of wealthy families brought along fancy inlaid wooden trunks when they arrived in Salamanca to study at one of Europe's oldest and most prestigious universities. Their luggage (now on display in the municipal museum) often was the most impressive thing about them.

An old proverb inspired by these witless sons of the nobility, whose money couldn't buy them smarts (so the story goes), is still quoted frequently in Spain: "What Salamanca doesn't give you, nature won't supply you."

The proverb does not apply to visitors to this Castilian city of peach-colored stone. Salamanca, where the university still sets the tone of daily life, has more than enough to give. With an architectural history spanning from the Roman to the Baroque (roughly 200 B.C. to 1750), its intellectual heritage is even more glorious, culminating in Miguel de Unamuno, the philosopher and writer of the "generation of 1898."

From afar, the steeples and domes of this city on a hilltop overlooking the scraggly Tormes River create a vista one might expect from a medieval university town. The scene calls to mind images of dour-faced seminarians who paraded through the narrow cobblestone streets in long black robes as little as 30 years ago.

But today, the thousands of students who come to Salamanca from all over Spain and around the world wear blue jeans, faddish gum-soled hiking boots and T-shirts. Their faces rarely look dour.

Their perky street behavior and social protest activities breathe a living spirit into the centuries-old porches, courtyards and columns of the old university buildings.

"Salamanca is the most crazy city in Spain," said Larissa Schwartz, 20, an American student from Middlebury College in Middlebury, Vt., who was visiting friends she met during a year studying here. "It's a lot more accepting than other parts of Spain."

The intertwining of old and new can be seen in the architecture of the modern university buildings, which blend seamlessly into the old university complex.

Even modern graffiti artists respect tradition. They usually deface walls in deep red paint, mimicking the color favored in past centuries, when students who passed their exams wrote their names in a concoction of bulls' blood and olive oil. These fading historic "tags" can still be seen on some university walls.

On the up-to-date side, newer wall space is often plastered with political posters, touting such causes as freeing the imprisoned insumisos - young men who refuse to participate in mandated universal military service.

The historic center of the university complex, which winds through narrow streets south of the Plaza Mayor, is the elaborately carved plateresque facade of the entryway to the old classrooms. The 16th Century facade, considered one of the best examples of the plateresque style, was built as a crowning touch long after the university was founded in 1218 by King Alfonse IX. It was the first in Spain.

A frog in its facade

In keeping with the mischievous tone of student life, a tiny frog carved into the facade is venerated as an unofficial school mascot said to bring good luck on exams. According to another legend, if your eye catches the frog without looking for it, you'll be married in a year. This is unlikely, since some people have a hard time spotting the little amphibian as they stand in clusters scanning the bas-reliefs. Hint: skullduggery is surely at work here.

Through the entryway, the nearly windowless classrooms where luminaries of the Spanish Golden age like Fray Luis de Leon once taught testify to the quality of student life in past centuries. The narrow wooden benches hardly wider than a plank were considered a luxury, since students in those days often sat on the floor.

The closed dark rooms easily evoke the image of Fray Luis when he returned to teaching after the Inquisition sentenced him to prison for five years for translating Solomon's Song of Songs from Hebrew into Spanish. His now-famous first words to his students were: "As I was saying yesterday . . ."

The classrooms are now used only for ceremonial purposes, but some things haven't changed. Through the 16th Century, professors and students debated whether Spain had the right to evangelize and conquer the New World. In this 500th anniversary of Columbus's voyage, universitarians are debating the issue with renewed fervor.

Then there are church debates. Salamanca is one of few Spanish towns with not one, but two cathedrals, reflecting the long-ago vagaries of construction. Behind the university complex, the Old Cathedral was built between the 12th and 13th Centuries in high Romanesque style with Byzantine influences. By the 15th Century, church leaders felt the cathedral was too small and dark, though modern visitors may find it mysterious.

In a big meeting in 1512, architects decided to leave the old cathedral standing while they built the new one. Construction took so long - until 1733 - that the old church had came to seem too traditional to tear down.

While still used for weddings, confirmations and important ceremonies, local people go to mass in the more intimate (and physically warmer) historic churches throughout the city.

If students are the blood that energizes life in Salamanca, the Plaza Mayor is the city's heart. Similar to the old Plaza Mayor in Madrid, but far grander, the 18th Century square is wide and airy inside four walls broken by 100 arches. While taking your cafe con leche at one of the cafes inside the square, you can contemplate the contenances of famous Spaniards carved into bas-relief medallians above the arches.

At about 10 at night, crowds of after-dinner strollers fill the square, meandering back and forth as they visit with neighbors and take in the night air. Later, the youth set takes over. As they have done for centuries, groups waiting for friends or the amorous waiting for their dates rendezvous under the clock on the north wall.

Night revellers might head on to drinks and tapas at their favorite nearby bars, like Bambu (through an alley downstairs under the Burger King), or herb tea at Bocquer, a quiet teahouse off an alley behind the completely round Church of San Marcos on D'Arco Street.

One of the best times of year for revelling in Salamanca are the festival days from Sept. 8 to Sept. 21, when famous toreadors come to town for the annual bullfights. Folk dancers and singers perform in the square at set times in the morning and evening. Information is at the tourist office on the east side of the plaza.

Historic references to revelling in Salamanca are in two statues directly south of the city walls at the original Roman bridge, built in 89 A.D. under the Roman emperor Trajan.

A newer bronze statue shows the blind man and his young helper who are the subject of the famous picaresque tale, El Lazarillo de Tormes. The adventure begins with the two characters drinking wine on the bridge, next to the pre-Roman marble statue of a bull.

A common pre-Christian artifact created by Celtic tribes to mark their pastures, the bull was once at the end of the bridge. But in the 19th Century, a zealous county leader ordered all the bulls thrown into the river because he thought they were pagan religious icons.

About 50 years later, city leaders fished the bulls out of the water, which is why the one at the Roman bridge is missing his head.

SIDEBAR: Where to eat, sleep, party

For more information on Salamanca:A brochure is available from the Spanish National Tourist Office, Suite 915E, 845 N. Michigan Ave., Chicago, Ill. 60611; 312-642-1992. In Salamanca the tourist office is on the east side of the Plaza Mayor.

Where to stay: The four-star Parador Nacional, just outside the city, has magnificent views and luxurious accommodations; $130 for a double. The quiet Hotel Clavero, 21 Consuelo, near the center of town; $49 for a double.

Where to eat: When the locals go out for a special meal, they eat at the Rio de la Plata, 1 Plaza del Peso, which offers traditional Castilian cooking. Bambu, 4 Parrillada, downstairs through a small street on the west side of the Plaza Mayor, serves top-notch tapas.

Where to party: For coffee and drinks, Niebla, 14 Bordadores, named after one of Miguel de Unamuno's works, offers atmosphere. The hilariously decorated Country, 5 Juan de Almeida, is a campy bar with a small dance floor where dancers shake to American and international "Western"-style music.