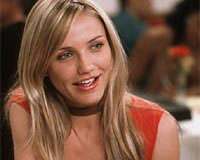 How Cameron Diaz Came So Far, So Fast

LOS ANGELES—In a few minutes, Cameron Diaz will go on television for an interview about her movie acting debut as the sexpot love interest in "The Mask." Before heading out to the set, she tugs at her wraparound miniskirt, worrying that it will fall open on national TV. Snapping her gum, she wonders, "Can I chew while I'm out there?"

Is she serious? Ironic?

"This is LIVE," a curt assistant announces with the delicacy of a drill sergeant: "There's no delay at all. It's real time. If a caller says anything weird, don't say anything, we'll disconnect them."

Diaz spits out the gum, takes a deep breath, and plasters on a smile. Ever perky as her job title demands, the 21-year-old model-turned-actress looks chastened, though she was seasoned by 65 back-to-back interviews in one day last spring at the Cannes Film Festival. She tries to stay calm chatting with her manager and publicist, who planned this appearance on CNBC's "Tom Snyder Show" as a low-pressure warm-up for the big publicity talk circuit. For a high-powered team trying to turn a newly-discovered starlet into a star, this is a safe practice stop before upcoming super yaks on "The Late Show With David Letterman" and "Good Morning America."

Contrary to the famous movie title, stars are made, not born. And on Diaz's team including manager, agent and publicist, the players are all eager, bright-eyed climbers in their 20s hoping their careers will shine as they make hers glow. That, at least, is the idea.

"We've told her story in a very carefully planned manner," says her publicist, Jeff Golenberg, of the public relations firm Bragman Nyman Cafarelli. "To me, it's a success story," he says, elaborating on what distinguishes her from the starlet hordes. "She's got a great sense of family. She's never been in the entertainment business . . . she's able to be herself. It's amazing when she does an interview how honest she is. That's very rare. . . . She's hardworking and determined yet treats people with a sense of decency. I think that makes her special. She's not a screamer. She's not a yeller. She's not demanding."

The team's goal boils down to one main point: "We're trying to show she's not just the next super model" trying to break into movies, says Golenberg.

That's not so easy. In the minute before the cameras go on, Tom Snyder, who has not seen "The Mask," asks Diaz to fill him in on the details. Like, uh, the name of the movie's star. That would be Jim Carrey, Hollywood's latest movie comedy sensation.

After mispronouncing her first name, Snyder introduces Diaz as a supermodel and one of this country's "top coverpersons." She does not correct him and only exclaims sweetly, "Oh God, supermodel." His questions focus on the difference between modeling and acting, which she describes as selling a product versus expressing your emotions.

At the end, off camera, Snyder tells her how much he enjoyed talking with her. "Forgive the stereotype, but most models are airheads who can't talk," he says, trying to give a compliment.

Later, her team fumes. "She's not a supermodel; she doesn't like it when people call her a supermodel," Nick Styne, her agent at International Creative Management, says over breakfast at the Four Seasons hotel. "Most supermodels can't act. There's a stigma attached to you."

The jury may still be out on the latest round of actress wannabes, though some are already skeptical about the long-term prospects for Elle Macpherson, Anna Nicole Smith, Kathy Ireland, Vendela and so forth. On the brighter side, actresses who began as models include Geena Davis, Sharon Stone, Michelle Pfeiffer and Demi Moore. 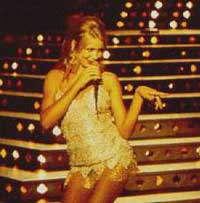 In the Entertainment Weekly article, Diaz was featured in a separate piece under the headline "First She Won a Lead Role: Now She's Learning to Act." The story's focus and substantial layout delighted the Diaz team.

"The piece, which was a publicity vehicle, helped create the buzz," Golenberg said.

Well-placed coverage and insider word-of-mouth generates what is known as "buzz" in the show-business world. Based on "buzz" and her own genuine charm, Diaz was featured in a four-page photographic kiss in Premiere magazine that originally was planned as a one-page piece.

"She's gorgeous and she had an interesting story. The way she got cast in that movie was unusual," explains Lisa Chase, senior editor at Premiere. "You hear a buzz about something and everybody out in Los Angeles wants to discover the next hot thing. She was a nice combination of smart beauty. It was a nice spin on the old model-actress routine."

Here's the nice spin: A native of Long Beach, Calif., Diaz began modeling at age 16 after a photographer at a party gave her his card. Her father, an oil company foreman, and her mother, a house broker, were supportive of her modeling career as long as she finished high school.

Her biggest moments as a model were a few covers for Seventeen magazine and a Nivea lotion campaign in Europe, according to her modeling agent. With the bulk of her work in catalogs and advertising, neither she nor anyone else ever considered her a "supermodel."

Diaz says she never yearned to act. As a lark, she auditioned for a small part in "The Mask" after seeing the script on the desk of her agent, Robin Levy, at Elite Model Management.

When director Chuck Russell began casting the picture, Jim Carrey was best known as the white guy on the television show "In Living Color." He had yet to make his splash in the surprise movie hit "Ace Ventura: Pet Detective," which turned him into the latest Hollywood sensation able to command a multi-million-dollar salary.

At an initial budget of $12 million, with more money for special effects yet to come, "The Mask" was viewed as a low-budget genre picture adapted from a little-known comic book. Hollywood's leading ladies were not clamoring for the role of the blond bombshell, says Russell, who previously directed "A Nightmare on Elm Street 3."

"There were a lot of women I would have loved to work with, but frankly, they weren't available for the part," Russell said.

The last laugh, of course, is on them.

Russell, taken with Diaz's beauty and natural manner, ran her through 12 auditions for the femme fatale lead. The sultry gangster moll Tina Carlyle captures the heart of nerdy bank clerk Stanley Ipkiss (Carrey), who can woo her only as his hyper-spoofing, green-faced, mask-wearing alter ego.

In mentions of Diaz's performance, critics have called her "breathtaking," a "lusciously lippy newcomer" and "a real find as the femme fatale who's just looking for the decent thing to do." Janet Maslin of The New York Times described the character as "a gorgeous, dopey bimbo who's enough to make Anna Nicole Smith look like a feminist college professor."

Tribune movie critic Michael Wilmington thinks the nature of Diaz's acting talents has yet to be seen. "She really doesn't have much to do in 'The Mask' but be sexy, and she's good at that," Wilmington says. "I think it would be very hard to judge her acting ability from that performance. She basically plays a fantasy figure and her part consists of self display."

Now Diaz may get her chance to see what she can do. After "The Mask" grossed $24.9 million at the box office in its opening weekend, she may be hotter than even the advance buzz predicted.

"It's a critical time right now," said Rick Yorn, her manager at the management firm Addis-Wechsler & Assoc. "You wait too long and the heat dies."

With many roles on the table, she and her team hope to land her a part in a character-driven ensemble piece, which would give her the chance for more expression. Whatever she chooses next, she now has the opportunity to make a lot of money, says her agent Styne.

For her part, Diaz says she is more than happy to go along for the ride, but she does not want to become a celebrity personality.

"I figure, hey, this is a chance of a lifetime and if it is something I can do well and make a living at it, I'm going to give it a go," she says. "(Fame) might end up happening, but it's nothing I've seen that has ever made most people happy."