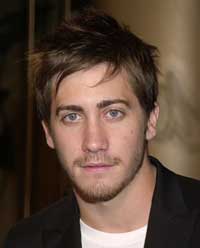 By Jessica Seigel | Special to Newsday

CURRENTLY APPEARING in real life as a freshman at Columbia University, 18-year-old Jake Gyllenhaal begged Universal Pictures brass not to send a limo to take him to the New York premiere of his first major movie, "October Sky."

Sure, kiddo, studio flacks promised the lanky underclassman leading a double life as a student of Virginia Woolf and Homer (not Simpson) while navigating his own personal odyssey into Hollywood fame. In the coming-of-age movie, Jake brings a Huck Finnish exuberance to the role of a NASA engineer who escaped life as a coal miner's son through his passion for building model rockets in the 1950s. Escaping Hollywood in the 1990s is another matter.

On premiere night, Jake emerged from his dorm room to horror. Straight ahead. Amsterdam and 116th Street.STRETCCCHHH

A student of Buddhism who wears prayer beads on his right wrist, he didn't go Zen upon spying the limo. He ducked and covered. "I was like, thwacka, thwacka," he said, recreating the running sounds his body made diving into the elongated vehicle hoping nobody would see. "Thwack."

Later that week, the studio sends only a black Lincoln Town Car to haul him all of 13-blocks from Columbia to a Q & A at the Film Makers Dialogue, a movie lecture series. Wearing an untucked red dress shirt over black jeans, Jake laughs about the absurdity of the cushy car and his might-be-famous situation. After all, though raised in Los Angeles, Jake came back east to find his inner, intellectual New York self. (His mother is from Brooklyn.)

Though nursing a cold, Jake is coltishly exuberant about his love for acting, discovering literature, his first big movie and New York - including the subways. Even his hair spiked in many jelled directions looks excited. During an earlier dinner at the Cafe Luxembourg, it is a wonder that he can devour a T-bone and talk so enthusiastically at the same time.

But it was at his family's table over food that his career first took off - through competing for attention with his sister, Maggie. "We are a pretty dramatic, outspoken family. You had to do something to be heard and seen," says Jake, who was once a shy, thick eyeglass-wearing child who felt eclipsed by his outgoing older sister, also an actor and student at Columbia. "I would have to break out in song just to vie. After a while, it becomes habit."

Jake's screenwriter mother, Naomi Foner, ("Running on Empty," "Losing Isaiah") and director father, Stephen Gyllenhaal ("Homegrown," "Losing Isaiah"), didn't want their children going pro too young. "We never pushed it," says the elder Gyllenhaal, himself raised in a modest Swedenborgian family from Pennsylvania. "We wonder why did this happen? We don't know why. We finally decided it's fate."

Giving fate a push, family friend Billy Crystal noted Jake's dramatic side at a social gathering, then encouraged him to audition for the part of his son in the movie "City Slickers." Later, Jake played other screen sons, including small parts under his father's direction: a mean punk in "A Dangerous Woman," with Debra Winger, and Robin Williams boy in an episode of the TV series "Homicide."

But Jake's parents called an acting time-out in sixth grade, refusing to let him accept a role in the hockey movie "Mighty Ducks," which required a two-month shoot away from home. "We wanted him to have a childhood. A real life," his father says. "Just look at the history of what happens to most childhood actors. It's dangerous."

Jake's real life included summer jobs as a busboy and a sous-chef to earn the $ 1,000 for his yearly contribution to his college fund. Eventually, Jake's parents invited a talent agent to see their son in the high school production of "West Side Story." With representation, Jake was soon auditioning three to four times a week after school, but was repeatedly turned down for parts. "It's hard when the director is silent, and you're giving it all your heart," he says. "After a while you get really disappointed."

After reading the script for "October Sky," Jake decided he wanted the lead very badly. The drama based on Homer Hickam's recently published autobiography, "Rocket Boys," centers on the bleak West Virginia town of Coalwood where the men toil in the dank blackness and danger of the local mine all their lives. Hickam seems destined to follow them underground until the Russian launch of Sputnik, the first space satellite, inspires him to aim for the heavens by building his own model rockets.

With the help of three buddies, his teacher and town folk, Hickam prevails over his father's opposition to win the National Science Fair and a college scholarship. As the driving force of the movie, Hickam appears in almost every scene - a daunting task even for a veteran.

The day of the audition, Jake got into his Volvo, then felt so sick he couldn't drive. It was mononucleosis mixed with the jitters. Weeks later, by the time his agent got him into callbacks, director Joe Johnston ("Jumanji") and producer Charles Gordon ("Field of Dreams") had already seen hundreds of teen actors.

Over the summer, Jake and his father worked on the part intensely and something seemed to click during the callback audition. "When he left the room, we said, 'That's the guy, " recalls director Johnston, who described Jake's portrayal as natural and subtle. "He's got some indefinable what do you call it - star quality. He radiates watchability."

Universal executives were skeptical about casting someone with so little experience. Weeks went by with no decision. One afternoon, he returned home from school and his father said to him: "I really hope you'll go to college." The news had come. He got the part. "I almost dropped dead," Jake says.

It would be lying to say he wasn't terrified. "I was coming out of high school theater," he said. "It was a huge jump." Jake could not look to his own school experience to play the boy who taught himself calculus to measure the trajectory of his homemade rockets. "I always hated math. I was never good at science," he says. "It was hard for me to understand that passion."

Insight came from watching the real Homer Hickam, now a retired NASA scientist, helping the prop guys work with the model rockets on the set near Knoxville, Tenn. "It was like he was 16 again," Jake says. "I hope my acting can keep me as young as the rockets kept Homer."

For now, Jake is bubbling over, for the first time inspired by academics - because of the movie. In the cozy dark of the Lincoln Town Car, he is so transported talking about his studies that he whips Virginia Woolf's "Mrs. Dalloway" out of his knapsack and begins reading a passage, continuing even after the car stops and the chauffeur opens the door.

Then the frantic publicist comes screaming because we were late. "Jake, Jake, Jake," she hollers. "We need you now." He closes the book and heads for the bright lights of the movie theater.