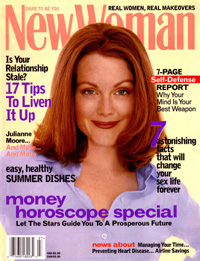 Julianne Moore’s remarkable range as an actress has taken her from playing opposite Sly Stallone to Anthony Hopkins. And with a trio of recent films, this art-firm darling has finally arrived in Hollywood. But first she needs to find a gas station.

HEADING to lunch with Julianne Moore at the wheel of her beloved driving machine isn’t exactly California cruisin’. In this land of ego-fueled sports cars and coveted convertibles, her gray Volvo stands out like hiking boots at a beauty pageant. The actress adores the Swedish honker because it’s sooo safe. Still, safe proves to be a state of mind as we plow a path from her rented home in the Hollywood Hills to her favorite hangout: The fuel gauge is flashing very empty.

"I can't pump my own gas. It just panics me," she moans. The thirtysomething actress still hasn't adjusted to L.A.'s car culture, even three years after moving from New York City to parlay her acclaimed art-film career into Hollywood success. East Coast habits--like dressing all in black, from her pullover to her loafers--die hard. Moore regularly vows to branch into other colors, but the somber monotone suits her low-key style, especially since she comes prepackaged in a striking palette--alabaster skin and fiery red hair inherited from her Scotland-born mother.

We scan the horizon. No full-service station. "Don't worry," she reassures. "This car can go at least another thirty miles in the red."

On the road and in life, Moore has fuel to spare. "I had a great year," she says, referring to her diverse roles in four recent and upcoming movies, ranging from a performance artist in the Coen brothers' next film, The Big Lebowski, to an intrepid scientist who scales mountains and crawls through mud in The Lost World.