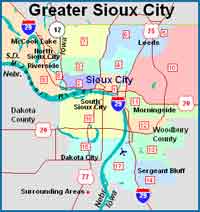 SIOUX CITY, Iowa--When it rains hard in Sioux City, blood sometimes runs down the walls at the K.D. Station, a former slaughterhouse turned into a four-story retail center.

Diners at Ruth's Cosina, a Mexican restaurant on the top floor, say they don't mind. Robert Miller, 27, an auto parts salesman, is not about to pass up the "best margaritas" in town because of bloody relics from the Swift & Co. packing plant, which closed in 1975. "It doesn't bother me," he said. "It's only like that when it rains real hard."

This is still a meat-packing town. Modern times have crippled the Sioux City yards, but hogs and cattle are still sold and slaughtered in Sioux City as they have been for a hundred years. The main highway through Sioux City, Interstate Highway 29, curves behind the stockyards where one of few remaining packing plants, John Morell & Co., looms black in the night, steaming and smoking through the second shift. The image seems incongruous, set less than a mile from the city's business district with its new $10 million convention center.

The smell from the plant claws the highway. Old-time Chicagoans will remember - although perhaps not with nostalgia - this distinctive odor long gone from their own city, once called "hog butcher to the world." "It's awful, just terrible," said Julie Thorton, a librarian. "Some say it's the smell of drying blood." It is. The dried particles are used in livestock feed mix.

Although still throat-clutching, the scent is only a hint of what it used to be before such packing giants as Cudahy, Armour and Swift closed their plants in the 1950s and 1960s. "It used to stink to beat high hell, but that was the smell of money," said Earl Chaussee, 65, as he drank a soda pop in the downtown Fraternal Order of Eagles Lodge 77.

In those days, the stockyards were the gritty industrial center of town. Today, abandoned railroad tracks crisscross the yards. At the south end are ruins of the old hog pens, three stories of open-sided corrals with a Roman Colosseum look. Weeds grow in an underground tunnel where hogs once walked directly into the slaughterhouse.

To the north lie the working livestock corrals, a gigantic structure that looks like an open airport hangar. When the 13 acres of pens were covered with a steel barrel roof in 1975, it was billed as the largest of its kind in America. But business has dwindled since packing companies began buying directly from farmers. Cattle sales fell six-fold in the last 20 years to 146,000 sold in 1989. Hog sales are down by half, to 707,000 in 1989, said Bob Gerking, the stockyard accountant. The cattle and hogs that once packed the yard now fill only smaller sections of the pens.

Like the pens, the 1912 Sioux City Livestock Exchange building is half-empty. "It's sad," says exchange director Al Welding, 60, who misses the days when farmers, salesmen and buyers waited in line to get inside.

But some scenes have not changed.Hogs still squeal on the way to slaughter. Until their turn at Morell, they lie quietly. But they snort loudly once prodded into line for the sandwich-like conveyor belt that carries them into the plant. Between 12,000 and 14,000 are killed and cut up each day, said plant manager Larry Sweeter.

On the damp "killing floor," workers shave, gut and decapitate 780 carcasses that pass their station each hour. The hogs hang at eye level. They are ghostly, floppy white after scalding water loosens their hairs.

"I kind of enjoy this," said Roger Miller, as he ran his bare fingers through hog innards, checking for disease. Then he stamped a hog heart with blue ink to show it was no good. "I just condemned that heart," he called out down the line. Before taking his job as a government inspector at Morell, he was a veterinarian for 22 years. "Here, I get to see what happens to the animals on the other end."

Most older people in town have worked in the plants at one time in their life. "It was hard work, but good work and the best pay in town," Chaussee said.

Although no longer located in the old stockyard district, jobs in area meat plants have actually expanded, concentrated in industry giants like IBP Inc. in nearby Dakota City, Neb. But salaries are down and the assembly lines move faster, causing various repetitive motion injuries. The unions no longer hold their former power, according to local residents and officials.

The meat-packing companies now regularly recruit employees out of state, many of them minority group members, said Glenda Donlin, Sioux City manager for the Iowa Department of Employment Services. Local young people say they don't want those jobs. "I wouldn't want to work in a place like that," said Tim Thompson, 22, as he watched cars cruise up and down main street on a Friday night. There's nothing else to do, he said.

At the K.D. Station retail complex, business is looking up after a tough decade fighting competing suburban malls. Tours of the old packing plant are particularly popular, said complex co-owner Vicky Lohry."People are really tickled," Lohry said. "They'll come by and say to their family: 'This is the exact spot I worked 40 years ago.' "