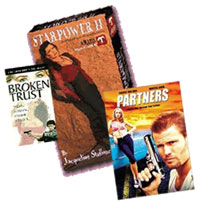 The Name is the Game

For Some Actors, Being Related to a Movie Star can be a Career in Itself

LOS ANGELES-The movie "Beach Babes From Beyond" is far less funny than a "Gilligan's Island" rerun, despite remarkable cameos by breasts not normally found in nature and riveting suspense generated by a bikini contest.

The incredible credits are no fluke. Swayze and Estevez, joined by McQueen, team up again in "Squanderers," about two dudes who spend Mafia millions on Porsches and call girls. McQueen and Swayze, joined now by Norris, appear together once more in "Death Ring," about an evil millionaire whose annual hunting party makes prey of humans. But, oh, look. What is that printed between the parentheses in the credits on the "Beach Babes" cover box? It reads: "STALLONE (Jacqueline), SWAYZE (Don), TRAVOLTA (Joey), ESTEVEZ (Joe)." That's Sly's mother, Patrick's brother, John's brother and Emilio's uncle (same as Martin Sheen's brother).

Small print on the "Squanderers" and "Death Ring" boxes reveal the McQueen is Steve's son Chad and the Norris is Chuck's son Mike.

These are the lifestyles of the relatives of the rich and famous, brought to you by the B-world of the expanding direct-to-video and overseas movie market. Call it the "lucky sperm club," quips Chad McQueen, who is finally secure enough about himself to joke about the legacy of his megastar father, who died from a heart attack in 1980.

The Hollywood tradition of venerable acting dynasties like the Fondas might suggest that what's in a name always breeds celebrity. But in a town filled with "relatives of," most will linger on B-movie lists, except the truly gifted few.

"There's always the curiosity if they can carry on (the family name)," says Gary Bettman, who produced "Death Ring." "In a lot of cases they can't. In most cases they can't. Did it happen to Peter Fonda? It happened with Mike Douglas but did it happen with Eric Douglas (his brother). Look at Scott Newman, he committed suicide. How hard is it to be Paul Newman's son?"

Deedee Pfeiffer (sister of Michelle) and Frank Stallone (brother of Sylvester) are still in B-land. Dark good looks and growing acting skills may some day make Chad McQueen a star, but probably not the Norris kid. "He's terrible," said one producer.

Good or bad, in Hollywood lately these relatives can count themselves in the best company, kept even by the president's brother. After last November's election, Roger Clinton began dogpaddling through his 15 minutes of fame with a recording contract and minor movie roles.

"(The market) is completely name driven. Names period," said Terese Linden, vice president for Artist View Entertainment, which distributed "Squanderers." "Everyone wants to make a buck. It's nepotism at its finest. It's what this whole city is about."

In the strictest sense, nepotism actually means giving jobs and perks to your own relatives. These producers and directors are giving jobs to someone else's. But as long as the public is mesmerized by stars and their families, low-budget Hollywood will cast the "relatives of" for their bottom-line dollar value.

"Honestly, from our point of view, it's a living," says Linden. "We call it making a 'family' movie. That's our way of laughing at it. It's funny."

But the relatives of the stars are not laughing all the way to the bank as they try to prove themselves and create an identity separate from their big-name relative.

When Sylvester Stallone and Sharon Stone began their careers naked and unknown in B-ville, no one gave them a second thought or even a snicker. So a little sympathy, please, as Joe Estevez, Chad McQueen and Melanie Shatner (daughter of William) tell their stories:

The very mention of "Beach Babes From Beyond" makes Joe Estevez wince. "Do I want to see it," he wonders, seated at the kitchen table of his small apartment on a picturesque winding street near Dodgers Stadium.

The answer is "probably not," though Estevez has nothing to be ashamed of in his role as the earnest old-time surfer, Uncle Bud.

"Quality does make a difference to me, but you don't know (in advance)," says Estevez, who this year acted in 30 video movies at a fee of about $1,800 a day. "It could be a classy, quirky movie, or it could turn out a piece of trash."

Twice divorced, which may explain why he works so much, Estevez lives modestly. He is not a clean freak, as suggested by a badly stained carpet and haphazard housekeeping. Photo machine pictures of his two young daughters are taped to the bare wall.

It is hard to imagine his older brother by eight years, Martin Sheen, in similar surroundings. Considering their strong physical resemblance, the comparison is hard to forget.

Because of the likeness, Estevez was paid to fly to the Phillipines as a double after his brother suffered a heart attack and breakdown on the set of "Apocalypse Now." This little-known, uncredited doubling job for long camera shots is not something Estevez brags about. Like his brother, he also suffered from alcohol abuse at the time.

More to the point, the job was a metaphor for their relationship, which is not close. His older brother, who took Sheen as a stage name, already was famous by the time Estevez finished high school yearning to be an actor. Instead, he joined the Navy, took factory jobs and acted in community theater.

"I think if Joe didn't have another brother in the businesss he would have gotten involved sooner," says brother John Estevez, a fundraiser in Dayton, Ohio, where the 10 Estevez siblings grew up. "It held him back in a way. It bothered him. He was constantly being compared to Sheen, which was very unfair. It was always on his mind."

Arriving in Hollywood in the mid-1970s, Estevez struggled with limited success and took his mother's maiden name, Phelan, for a while. His low-budget movie career finally took off about eight years ago. At about the same time, Sheen's son Emilio Estevez, reclaiming the real family name, became known for "The Breakfast Club."

"I worked really hard in this town for a lot of years and it (his acting) finally caught on. I feel what I've got now I've earned it. I'm proud of myself," says Estevez, who has played good and bad cops, avenging heroes, despicable villains and an evil spirit.

Several times Estevez remarks that he hopes he doesn't sound bitter, insisting that is not the case. "I would love to work A movies. I'd love to be box office in the United States. But I have right now pretty much everything I need and want. I wake up in the morning and it's a dream to make my living as an actor," he says. "You're getting paid for something brain surgeons will drop their utensils to go out and do."

If moxy, muscles and immodesty are a prerequisite for stardom, then Chad McQueen is on the road. "I want to take the big chair," he says, picking the largest one for an interview in his manager's office.

The thirtysomething scion is all spunk like his dad, who was a lady killer, daredevil, expert motorcyclist and superstar in the 1960s and 1970s. The son's tough guy looks, though, remind one less of his father than Bruce Willis, a resemblance others have noted as well.

"Except I have hair," quips McQueen, who wears his slicked back for a bad-boy effect.

Dressed in sweatpants and boxing training shoes, he has just finished his daily karate and kick-boxing work out. Apparently without realizing it, he periodically flexes his left pectoral under a white T-shirt.

During the 1980s, McQueen raced cars professionally and took a few roles in movies like "The Karate Kid." He only started seriously applying himself to acting in the last two years.

"I didn't want to be the 'son of' for the rest of my life, who tried this and tried that and never succeeded," he says. "I don't want to be 35 years old and go into a restaurant and have people say, 'Oh, that's Steve's boy.' " A divorced father of a 5-year-old, McQueen hopes to head fast in one direction: "Right to the (expletive) top. I want to go as far as I can go, just to see what it's like."

In his early 20s, he didn't feel so gung-ho and at first wondered if his name, not his ability, landed him roles.

"He just got discouraged," said his mother, Neile Adams, the first of Steve's three wives. "He was looking at the end result of what his father achieved rather than what you have to go through to get there." With a laugh, Adams pointed out that one of her ex-husband's first movie roles was in "The Blob."

The son is now delighted that the McQueen name and his growing screen credits can raise $750,000 in movie financing. One producer said McQueen, who declined to divulge his salary, can command $20,000 to $30,000 per picture.

In the third sequel of the "Bloodstone: Subspecies" video movies, Melanie Shatner plays the brave, gun-toting sister of the vampire Radu's latest victim.

After a recent screening of the Paramount Home Video oeuvre on the studio lot, the film's producer, Charles Band, asked a critical question: "Did you need a barf bag?"

Even amid the gorefest, the heroic sister role has meant a chance for Shatner to pay her dues and polish her acting skills in front of the camera. Sweet-mannered and much prettier in person than the film suggests, the actress says her name may indeed open some doors, though it was no blessing at first.

"It's helpful now. Sure it is. In the beginning, it was a curse," says Shatner. "When you're just starting, if you make mistakes, if you have emotional problems and are working them through, you don't have the anonymity of Joe Smith, who can bomb on his third audition and go home and he's not dinner conversation that night."

The biggest hurdle was perhaps her father, who adamantly insisted she not go into acting because of the uncertainties of the business.

"It's no mistake the thing he's known for is the commander," says Melanie of her father, who played Capt. Kirk on the old "Star Trek" and later T.J. Hooker in the TV series of the same name. "He has a parental thing about him."

But Melanie, the youngest of Williams Shatner's three daughters, persisted. "He said, 'Then you'll have to do it on your own. For me that's what I wanted most," said Melanie, now 27. "I really wasn't prepared in a way. . . . I was scared I was disappointing him."

With more experience, often in roles as the nice girl next door or the athletic type, she has tamed her fears. Her father, who did cast her in a small part in the movie "Star Trek V," also has come around.

"She's worked enough at this point that everyone (in the family) realizes she's serious," says sister Lisabeth, a screenwriter and former attorney. "Someone who's stuck through the amount of disapproval she has means they're serious."

Very serious. So what if her father once did Shakespeare before going on to lower-brow "Star Trek" fame? "I'm working as hard as if I were doing Shakespeare," says Melanie. "I work very hard and deposit my checks. I'm like anybody else that way."